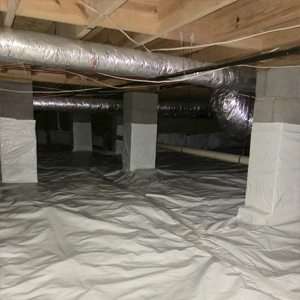 The short answer is YES.

My previous post on radon testing explains that crawl space homes can have elevated levels of radon in the living area. But how do you actually mitigate a crawl space?

But, Why Encapsulate Your Crawl Space?

Crawl space encapsulation is something that happens all the time for a variety of reasons: moisture management, dehumidification, mold growth prevention, odors, creating storage space, etc. However, crawl space encapsulation and radon mitigation also go hand in hand, and are absolutely essential for the system to work properly.

Generally, there are three types of homes:

The idea of radon mitigation, in general, is to use a radon fan to depressurize underneath the slab or vapor barrier (for crawl spaces) to draw out radon and move it outside before it ever enters the home. In basements, normally all that is required is a 3 step installation after initial diagnostics.

The basic idea is to pull the air out from under the slab before the radon enters the house. Trying to ventilate the space after the radon gas has entered is very difficult and energy inefficient.

This is why crawl space encapsulation is so important. There is no slab that acts as an airtight barrier from which to pull air from, so the volume of air to pull from is too large for a radon fan to be effective. Radon fans are small and efficient, so you need the fan to be able to pull air from the entire crawl space so no radon is entering the building envelope.

Encapsulating Your Crawl Space Is Crucial.

There is only one way to achieve total coverage in negative pressure from the fan (other than pouring a concrete floor in the crawl space): encapsulate using polyethylene plastic. The plastic attaches to the foundation walls and the top edge is spray foam sealed to prevent any air gaps or leaks. Then, the plastic is rolled out onto the floor. The overlapping seams are all taped and the support piers are wrapped.  Now, a complete seal has been created and the radon gas is trapped as it escapes the ground. It is not just important, but critical to the success of the system to achieve a complete seal of the crawl space.

After that, it’s the same steps as a slab: Place the suction pipe under the vapor barrier and draw the radon (now contained by the barrier) out before it ever enters the crawl space. It really is that simple.

Can’t I Just Use The Existing Vapor Barrier?

Lots of people ask me if their current vapor barrier will work with a mitigation system and the answer is almost always NO.

If it has been professionally encapsulated for any other reason, usually we can use that barrier. It will have to be inspected to make sure the seal is acceptable. Other than this example, a new encapsulation will have to happen. Basic 6 mil vapor barriers (or as we call them – the black trash bag) will not work because it is not sealed to the walls and seams are not taped. To reuse the material that is down there would require adding more to attach it to the walls.  The extra labor costs associated with excessive taping, cleaning and spraying adhesive so the tape will stick to the old barrier almost always makes this a more expensive option.

Plus, you’re getting a vastly superior product for less money overall. The material we use is Viper brand non-recycled, reinforced plastic that won’t break down over time. The black trash bag becomes brittle and falls apart after a couple years. We have switched over to this material completely. It outperforms (see comparison sheet) other brands and doesn’t give the dreaded cat pee odor other materials are infamous for.

As always, feel free to reach out with any questions.